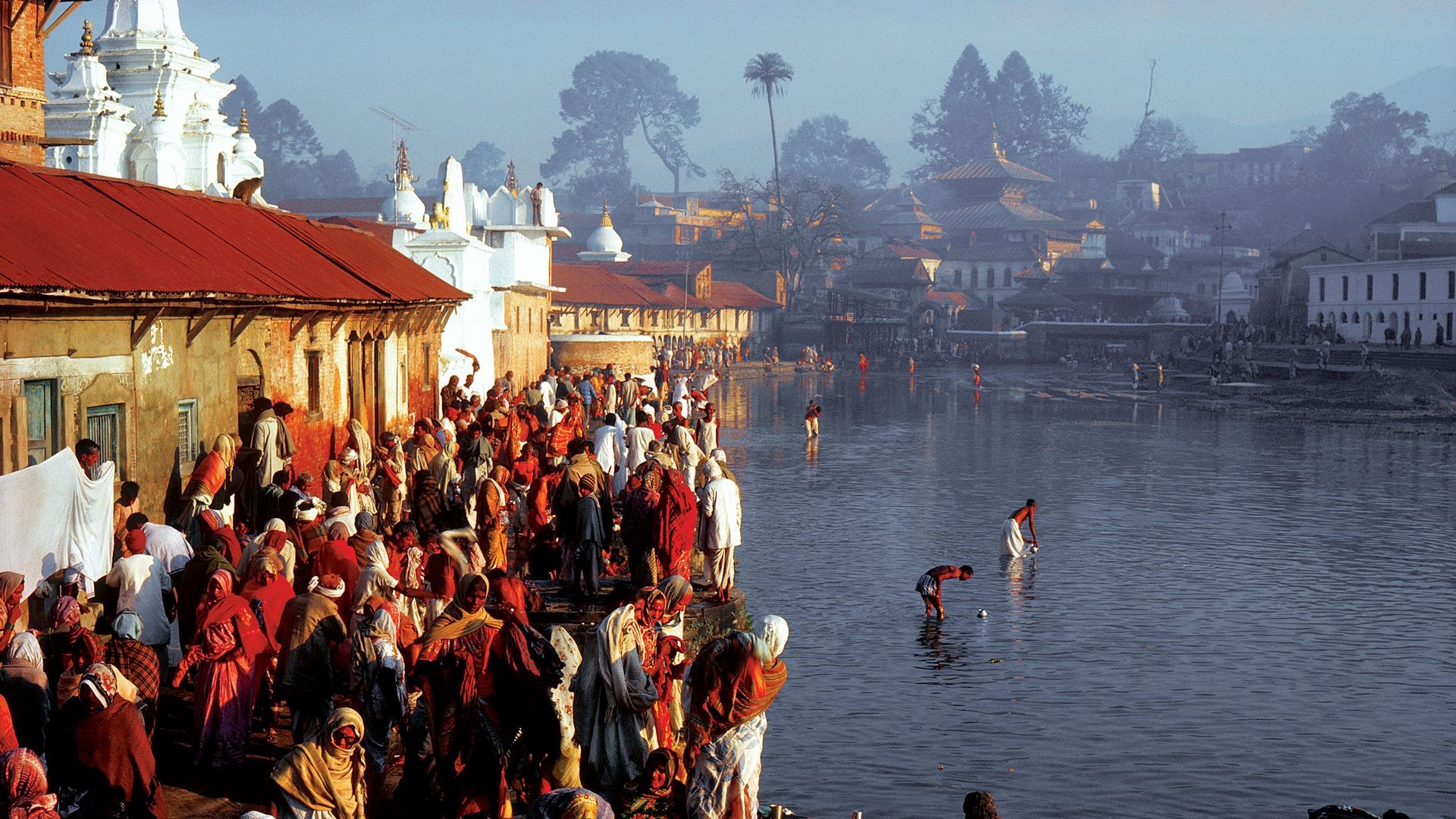 Changu Narayana – Changu Narayan is believed to be the oldest temple of Nepal. This temple belongs to Lord Bishnu, one of the three Hindu God (त्रिमूर्ति,trimūrti), two other Brahma and Shiva. According to Hindu scriptures, Brahma is creator of the world, Bishnu is protector and Shiva is destroyer. Bishnu's role is to return to the earth in troubled time, destroy the evil forces and restore the balance of Good and Evil. So far, Lord Bishnu has been incarnated nine times. Hindu devotees believe Lord Bishnu will be reincarnated one last time close to the end of this world.

Legend says, in ancient times, Lord Bishnu visited this place and stayed on the high hilltop. The villagers came to know this and they built a beautiful temple for him. In Nepal, there are many people who worship Bishnu as the greatest God. Those people are called Vaishnava. Vishnu monotheism is called as Vaishnavism.

In Rig Veda and Brahmanas (mostly in the commentaries of the Vedas) Lord Bishnu is regarded as the most important of all Gods. Rama and Krishna, two of his incarnations are the subjects of the epic stories called Ramayana and Mahabharata respectively.

In those scriptures, Rama and Krishna present heroic activities to protect people from evil forces and at the same time impart great lessons and wisdom on different aspect of life. Rama is believed to be initiator of ''Yoga-Vasistha" one of the greatest text on Yoga Philosophy. Krishna is the initiator of Geeta, another great text on Karma-Yoga and many other form of Yoga.

Lord Bishnu is depicted as blue colored skin and with four arms. In four hands, he always carries four objects, representing things he is responsible for. The objects symbolize the following:

The conch: It produce sacred sound. Mostly, the sound Om, ॐwhich represents the primeval sound of creation, the underlying sound which vibrates everywhere, every moment.

The Chakra: It symbolizes the Mind. The nature of mind is similar to the Chakra which is rounding or moving every moment. Lord Bishnu has the capacity to gain great control over it.

The Lotus flower: The lotus is a symbol of wisdom, the beauty of life and liberation.

The Mace: The mace represents mental and physical strength. Bishnu symbolically shows how important it is to be healthy and strong in body and mind. Because, नायमात्मा बलहीनेन लभ्यः,the realization is unattainable for those who are weak in Body and Mind.

Meaning: (I salute to Lord Bishnu) Who has a serene appearance, who rests on serpent bed, who has a lotus on his navel and who is the Lord of the Devas, who sustains the universe, who is boundless and infinite like the sky, whose color is bluish and who has a good looking physical appearance, who is the husband of Laxmi, the goddess of wealth, whose eyes are like lotus and who is attainable to the yogis by closing eyes and going into deep meditation, who removes the fear of worldly existence and who is the lord of all sphere of creation.

In Hindu scriptures, Lord Shiva is presented as a great Yogi, most powerful but always with a great heart of loving kindness. Devotees call Lord Shiva as आशुतोष,who is easily pleased. The reason thousands of people gather in his temple in Pashupati Nath is Lord Shiva's generosity towards his devotees. Simply Offering a flower or lighting a lamp in his idol is wish-fulfilling. Ask anything with a pure heart and it is granted by Lord Shiva! This is the belief of devotees.

आरतीor the ceremony of Lighting several lamps in the evening is regarded to have symbolical meaning behind it. Light is considered a symbol of immortal wisdom. तमसोमा ज्योतिर्गमयः,tamasōmā jyōtirgamayaḥ, may there be Light in the place of Darkness. It means, let the Light of wisdom expel the darkness of ignorance.

Ignorance is suffering. Ignorance is not knowing the way of life and the world. More ignorance more restlessness and more suffering. More knowledge, more peace and freedom from suffering. Lord Shiva helps to expel the darkness of ignorance. ''Shiva Sutra", "Vigyan Bhairav Tantra" and "Shiva Geeta" are the major texts carrying the philosophy of ignorance to wisdom. In those texts, a human being is called 'Jiva' having a potential of 'Shiva'. If we learn the philosophy of sutra and tantra, a transformation in us results in becoming 'Shiva'.

The greatness of Shiva is he loves and helps human beings in raising the level of consciousness and transform.Once we question ourselves as 'who am I?" again and again, all other thoughts from the mind disappear and we realize we are "Shiva". Ramana Maharshi has explained this philosophy beautifully in his masterpiece "Who am I?"

न हि स्वात्माराम विषयमृगतृष्णा भ्रमयति,Once one realizes his soul, he no longer runs after money, fame or sensual pleasures, rather he enjoys the boundless peace of mind, sublime experience of joy.

The devotees practice chanting the following verse which says "O lord Shiva, you are the one who help us purify our body and mind so that we stop wandering here and there for material quest and could be equal to yourself.


Lumbini– Lumbini is a Buddhist pilgrimage site located in southern plain of Nepal. Gautama Buddha, the enlightened one was born in Lumbini some 2560 years ago. Lumbini is the best place for sitting in meditation and experiencing energy fields around. As Buddhism is flourishing everywhere, the birthplace of Buddha is gaining its reputation as the fountain of world peace.

Pilgrimage: Thousands of Buddhists visit Lumbini every year to experience positive energy and peace of mind. Visiting the birthplace of Buddha once in a lifetime is so much rewarding. Learning basic doctrines of Buddhism and practicing meditation in Lumbini helps to regain purity of mind. It is said that 'if you walk ten steps towards God, God will walk 100 steps towards you.' Visit Lumbini and experience the Buddha-mind!!

Buddhism starts with faith and ends in wisdom. Visiting Buddhist pilgrimage is increasing and cultivating faith in Buddha, and in the wisdom that leads towards Buddha-hood. For the attainment of super-conscious mind (लोकोत्तरचित्त), one is expected to know the qualities of Buddha and his way of life. The devotee respect Buddha because they want the same quality in themselves.

In pilgrimage sites, Buddha and other enlightened masters are still dwelling in invisible forms to help the devotees to get rid of suffering and to attain the peace of mind. They do so because of compassion.

The significance of visiting the birth place of Buddha: In the birth place of Buddha (Lumbini), there is a wide milieu of tremendous amount of positive energy. Thousands of enlightened disciples of Buddha are still visiting that place and sitting in meditation. A pious energy field is always intact there. Science says, energy can neither be created nor destroyed. Energy can only be transferred from one form to another. The pilgrims visit Lumbini to resonate with that energy field. How much one resonates the vibration of enlightenment depends on the capacity of every receptor.

Philosophy: Buddhist philosophy is based on three pillars – Following the five precepts, Practicing Meditation and attaining Wisdom (शील,समाधि र प्रज्ञा). Buddha's Noble Eight-fold Path reveals the ways of Dharma practice and the ultimate goal of Enlightenment or Nirvana. (Nirvana is peace). The law of dependent origination, the five aspects of knowledge, The doctrine of Emptiness, The Concept of Buddha Nature, The Mind-only philosophy and so on.

Buddhism inspires to practice meditation to attain peace of mind. As the mind becomes peaceful, the wisdom arises in the practitioner. Wisdom is to see things as they are. This liberates the practitioner from suffering. Once the suffering comes to an end, the enlightened person is filled with boundless compassion towards all living beings.प्रज्ञया न भवे स्थानं कृपया न शमे स्थितिः । According to Buddhist philosophy, The enlightened beings are gone beyond the world of suffering but they are still around because of the compassion towards those who are suffering.

Practice: Buddhism is practice based spiritual path. In this path, knowing is not enough. One has to think again and again, analyze the nature of things from every aspect and experience the knowledge by the practice of meditation. Only the knowledge that is practiced becomes liberating. Some of the practices are: Reading or listening – analyzing – experiencing (श्रुतमयी प्रज्ञा,चिन्तनमयी प्रज्ञा,भावनामयी प्रज्ञा), the ways of the Bodhisattvas, The six excellence (षट्पारमिता), Samatha and Vipassana Meditation.